Last month Catherine Head and I from Oxford’s Ocean Research and Conservation (ORC) group were lucky enough to take part in the Berteralli Foundation Chagos Archipelago expedition. On the expedition a major focus of my work was to conduct some of the first exploration of the twilight zone reefs of Chagos.

The twilight zone, known scientifically as mesophotic coral ecosystems, includes coral reefs from 30m to 150m deep. These reefs are characterised by light dependent ecosystems that adapted to very low levels of light. Due to the remote nature of the archipelago, in recent times diver surveys have only been limited to a maximum depth of 25m, meaning that most twilight zone reefs have never been scientifically surveyed.

So why are we interested in the twilight zone?

Many of the impacts that cause the most damage to shallow reefs in Chagos, for example processes such as coral bleaching and direct storm damage, are believed to decline in severity at greater depths. This means that twilight zone reefs may act as a refuge for shallow reef life.

We used a remote operated vehicle (ROV) to survey the upper twilight zone around the Chagos Archipelago in the 30-60m depth range. Already we’ve had many exciting findings! For example, the charismatic Chagos clownfish, Amphiprion chagosensis, found only in Chagos, had previously been found down to 25m, we’ve extended that known depth range down to 37m after documenting several individuals in an anemone off Peros Banhos in the north of Chagos earlier in the expedition. 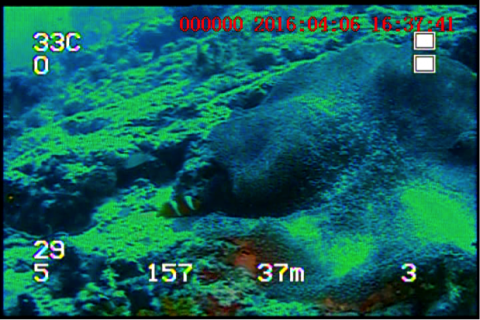 The structure of the reef changes a lot in the twilight zone. One of the most common corals found on the shallow reefs of Chagos belong to the genus Porites. On shallow reefs these corals have distinctive rounded boulder shapes. At twilight depths we’ve documented very flattened plate-like Porites colonies. We think this change in shape is an adaptation to the lower light levels on these deeper reefs, as this pattern has been observed on twilight reefs elsewhere in the world. However, researchers are still trying to understand the advantages to corals of becoming flatter, particularly at the fine scale. 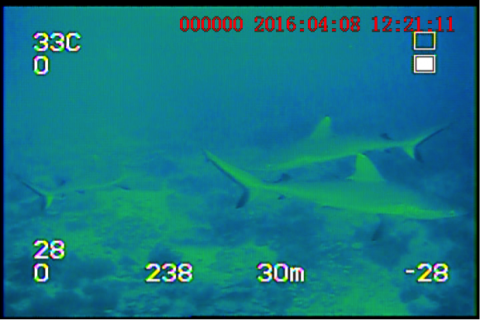 As well as the seabed reef-specific twilight zone surveys, when deploying the ROV we often found lots of sharks at twilight depths. Mostly these have been grey reef sharks, Carcharhinus amblyrhynchos, that have been interested in the ROV unit, circling in for a closer look. On a couple of occasions, during ROV surveys in one of the lagoons we found black-tip reef sharks, Carcharhinus melanopterus.

What is clear from the ROV surveys is that sharks in Chagos are regularly visiting twilight reefs, further reinforcing the importance of these deeper reef habitats to larger mobile predatory species in the marine reserve.