Our large-scale island rewilding programme, Healthy Islands, Healthy Reefs, is based on sound science highlighting the significant linkages between the health of the islands of the Chagos Archipelago and their surrounding coral reefs.

By rewilding degraded islands, we aim to boost the survival of their seabird populations and support thriving coral communities.

Our Healthy Islands, Healthy Reefs programme will rewild 30 islands, increasing the amount of suitable habitat available for nesting birds by 350%.

When humans first discovered the archipelago in the 1700s they introduced several invasive species, including rats, and cleared native forest and vegetation for habitation and coconut plantations. Coconut farming ceased in the 1970s, but as a legacy of the plantation era invasive rats now inhabit every farmed island.

By managing the abandoned coconut plantations and eradicating the rats, a more natural, seabird-driven ecosystem will regenerate, resulting in healthier islands and coral reefs, and creating a refuge for native species such as the iconic coconut crab and red-footed booby.

Healthy Islands, Healthy Reefs aims to rewild the 30 ecologically degraded islands of the outer atolls of the Chagos Archipelago, returning them to refuges for native species and supporting thriving coral reefs. 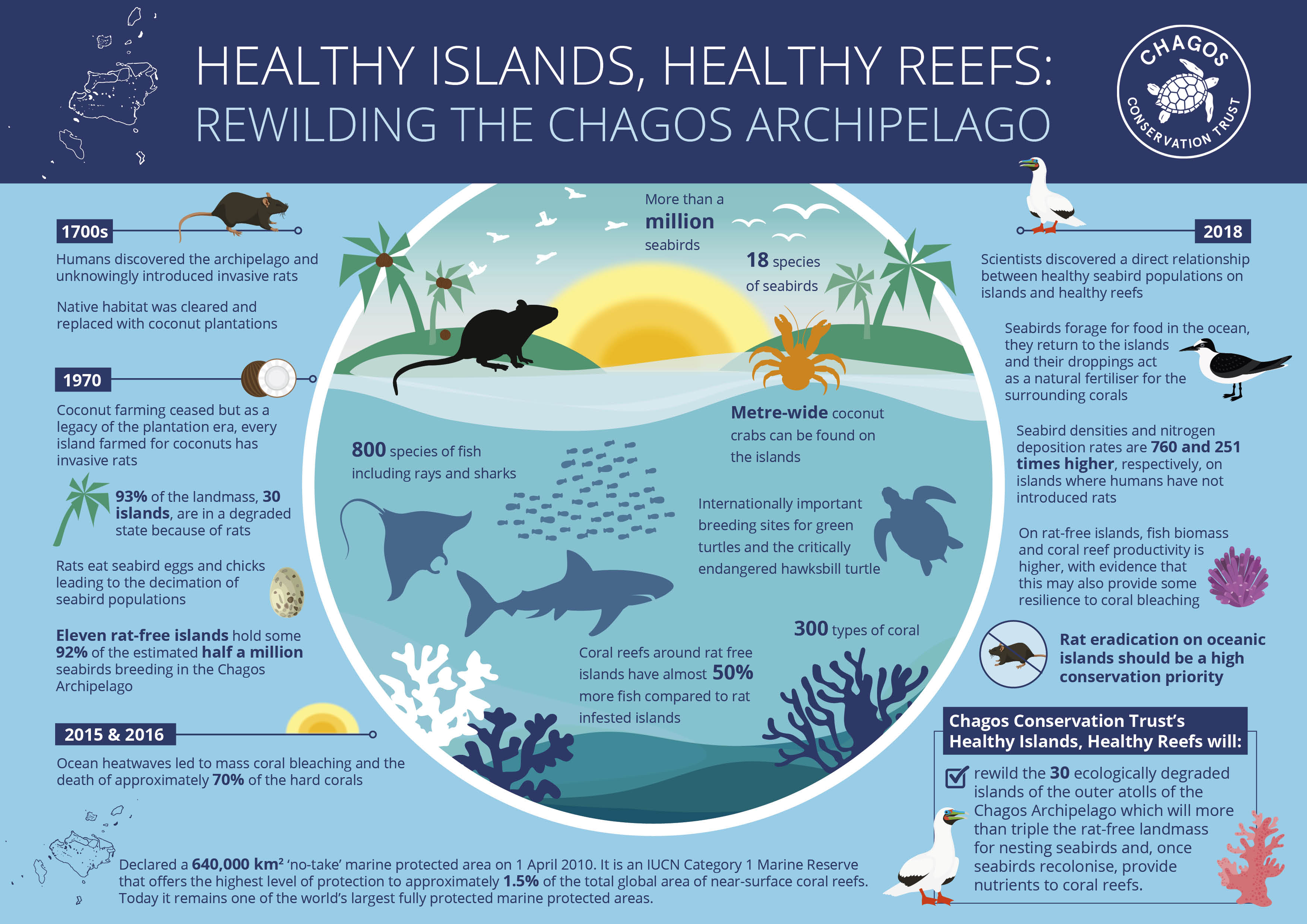 In 2018 scientists from the Bertarelli Programme in Marine Science discovered a direct link between healthy island seabird populations and key reef health indicators, such as herbivorous fish populations.

Seabirds feed from the ocean and their droppings act as a natural fertiliser for corals that surround the islands they inhabit. Where rats are present, this relationship breaks down as rats decimate the seabird populations by eating eggs and chicks, and destroy native plants.

The researchers found that seabird densities and nitrogen deposition rates are 760 and 251 times higher, respectively, on islands where rats are not present. On the reefs around these rat-free islands, fish biomass and coral reef productivity is also higher, with evidence that this may provide some resilience to coral bleaching.

Currently, over 50% of the islands–constituting 93% of the landmass of the Chagos Archipelago–are in a degraded state resulting in a marked reduction of biodiversity and compromised coral reefs. The 30 rat-infested islands planned for rewilding have significantly fewer, to no, seabirds, particularly ground nesting species, to those without rats present.

Eleven rat-free islands hold some 92% of the estimated half a million seabirds breeding in the Chagos Archipelago.

Over the past decade, the archipelago has seen two significant episodes of coral bleaching due to extreme sea temperatures, resulting in high levels of coral death and a reduction in how well the reefs function.

The 2015 ocean heatwave killed 60% of the hard corals at depths of up to 10 meters across the archipelago. Some species were more affected than others with the Acropora corals­, previously the most abundant, suffering losses of 86%.

Before the corals were given a chance to recover, just one year later another heatwave struck. Data collected following the second warming event suggested that approximately 70% of hard corals were lost between 2015 and 2017.

With the frequency of warming events predicted to increase, rat eradication on oceanic islands should be a high conservation priority as it not only benefits terrestrial ecosystems, restores seabird-derived nutrients and enhances coral reef productivity, but also builds reef resilience to climate change.

Presence of rats in the Chagos Archipelago

Presence of rats in the Chagos Archipelago

Ile Vache Marine is a small island within the eastern Peros Banhos Strict Nature Reserve. It lies amidst six islands that are classified IUCN Important Bird and Biodiversity Areas, designated for their breeding seabird populations.

Unlike its neighbouring islands, Ile Vache Marine was rat-infested and had very few breeding seabirds. In 2014 CCT conducted an invasive rat eradication operation as part of the Ile Vache Marine Restoration Project.

The island was officially declared rat-free in 2017, using the internationally recognised guidelines, and has since seen the return of native flora and fauna. This was the first successful rat eradication operation on an island in the archipelago, providing proof of concept and forming the basis of CCT’s Healthy Islands, Healthy Reefs programme.

Research demonstrates that removing invasive rats is the highest priority conservation management action to restore species and build reef resilience, and is now the focus for CCT.