This month, the Chagos Conservation Trust (CCT) celebrated its twentieth anniversary. An evening reception kindly hosted by our first patron, Sir Bruce MacPhail, included presentations from some of CCT’s Trustees: 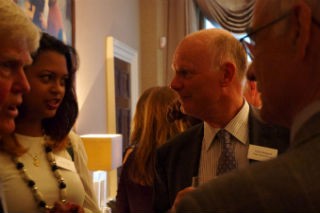 “Chagos is a mind blowing, sensory overload wildlife experience. To sustain this vital refuge for nature is becoming increasingly important in the face of climate change and the many other pressures on our oceans.” Dr Heather Koldewey, CCT Trustee.

Another Trustee, Professor Charles Sheppard, spoke about how the Chagos Islands have the highest known fish biomass in the Indian Ocean and may play a key role as the ocean’s genetic ‘highway’, vital for many species including fish, turtles and crabs. “Understanding Chagos may be the best remaining hope for millions of the Indian Ocean’s poorest people.”

Established in 1993, CCT remains the only UK charity working solely on conservation in the Chagos Islands. Committed to protecting this amazing place, we are working to protect Chagos for now and for the future. We look forward to the next twenty years!