In October 2014 Professor Graeme Hays and Nicole Esteban visited the Chagos Archipelago as part of our ongoing sea turtle conservation research that is being conducted in collaboration with Dr Jeanne Mortimer (University of Florida). Our most recent previous fieldtrip had been in October 2012 when we deployed satellite tags onto nesting female green turtles and buried temperature loggers into the sand on nesting beaches to monitor incubation conditions. Remarkably the satellite tags worked for almost two years, so we were able to clearly identify the feeding grounds of the turtles when they departed from Diego Garcia at the end of the breeding season. The satellite tags revealed incredible long distance migrations with some individuals travelling as far away as Somalia, a journey of over 4000km, while other turtles did not travel so far, moving to feeding grounds on the Great Chagos Bank, the Seychelles and the Maldives (Figure 1). Those results have been formerly published in the journal Conservation Biology and are being used to drive conservation planning across the Indian Ocean. Most recently (September 2014) our tracking results were discussed at a United Nations meeting in Bonn (Germany), where they were used to illustrate the importance of multi-national conservation planning for highly migratory species that cross international borders. On the foraging grounds the GPS locations provided by the tags showed how green turtles maintain fidelity to very small areas, if you like “their home”. For example, one individual tracked to the Great Chagos Bank has stayed in the same area for 20 months (until the tag signals ceased) and was generally living in an area only a few 100 metres across.

Our recent trip to Chagos in October 2014 was designed to build on the success of our previous work. We received tremendous support from a wide range of on-island personnel and began our 2-week visit with a highly productive journey to the outer-islands as part of Brit-Ops Sovereignty Patrols. We travelled ashore to 13 islands and deployed temperature loggers at nest depths as well as completing beach surveys to assess the levels of nesting by counting turtle tracks (Figure 2). The loggers we buried will work for up to 2 years, recording the sand temperature every 4-h. These data are important because the gender of turtle hatchlings is determined by the sand temperature with male hatchlings being produced in cooler sand and female hatchlings in warmer sand. Our data will importantly allow us to assess and monitor the sex ratio of hatchlings being produced at Chagos across years and hence understand some of the implications of climate warming for this population. 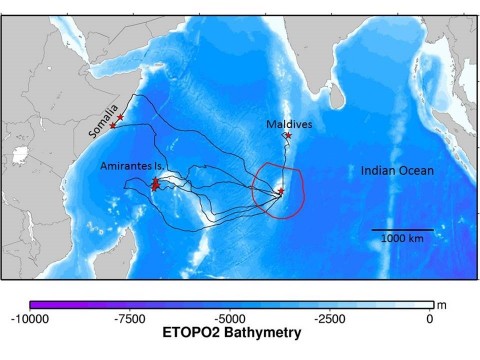 Figure 1. The tracks of 8 green turtles equipped with satellite tags while they were nesting on Diego Garcia in October 2012. The tags provided up to 15 GPS locations per day for up to 20 months.

Back on Diego Garcia we downloaded re-batteried and redeployed 30 temperature loggers that had recorded sand temperature for the previous 2-years. Antenor Nestor Guzman (Environment Department, USN NAVFAC) and the Royal Marines had done a magnificent job in recovering these loggers. They hold a wealth of information that we are currently processing. Our first glance at these data has revealed that the sand temperatures at nest depths are relatively cool, most probably due to shading by beach vegetation, so that often nests are at cooler male-producing temperatures. This is good news in that it means that the Chagos population will be more likely  to remain healthy, even under scenarios of climate warming. 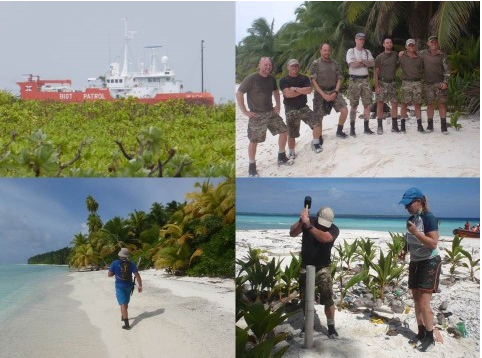 Figure 2. From clockwise from top-left. The Marlin (BIOT Patrol vessel) visiting outer islands in the Chagos Archipelago. Members of the Brit-Ops Sovereignty Patrol who helped with temperature logger deployments around the archipelago. Taking a sand core so that a temperature logger can easily be deployed at a depth of up to 1m. Senior Fisheries Protection Officer, Tom Franklin, starting a beach patrol. Counts of turtle tracks can be used to assess turtle nesting numbers.

At Turtle Cove, a sheltered creek in the southern part of the lagoon in Diego Garcia, Jeanne Mortimer has led long-term monitoring of the growth rates of the juvenile green and hawksbill turtles through repeated measurement of the same individuals over the last 20-y. These results are revealing very slow growth rates for the turtles (circa 1 cm per year) and hence mature turtles are likely to be very old, possibly >40 years. In addition, in an effort to learn more about how these juvenile turtles use the lagoonal habitats on Diego Garcia, we deployed high resolution tracking tags to several individuals (Figure 3). These tags record an individual’s movements at incredibly high resolution (40 Hz) so that, for example, the impacts of tidal flows and importance of small microhabitats can be assessed.

Figure 3. Turtle Cove conservation research. As part of conservation research to understand the importance of the lagoonal areas on Diego Garcia for juvenile sea turtles, individuals are captured, measured and then released with high resolution data-loggers to document their movements over micro-scales and hence identify key habitats for turtles in this area.

Emerging from the recent United Nations meeting on sea turtle conservation in the Indian Ocean was the fact that we need to satellite track more green turtles from Chagos in order to identify the their full range of feeding sites so that effective international conservation planning can be implemented accordingly. In addition there is a need to satellite track nesting hawksbill turtles whose movements remain unchartered. So we look forward to working closely with personnel on Diego Garcia again in 2015 when we plan to return for another round of satellite tag deployments.

Many thanks to all the personnel on Diego Garcia that made our trip such a success.

(Please email g.hays@deakin.edu.au  if you would like a pdf copy).