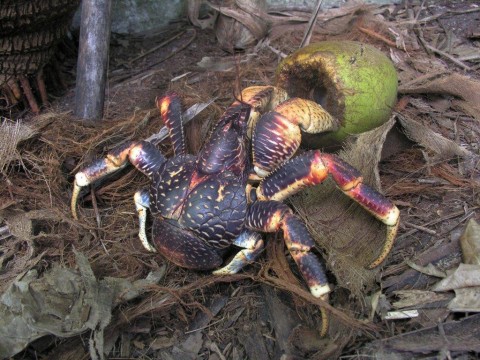 Among the most spectacular land living invertebrates found in the Chagos Archipelago are the land and shore crabs.

Without doubt, the most impressive of these is the coconut or robber crab, Birgus latro. With a leg span of up to a metre and weighing up to 4 kg this is a giant of the terrestrial invertebrate world.

These land crabs got their scientific name ‘latro’ from the habit of wandering into camps and stealing things, such as food, pots and pans and on occasion bottles of whisky.

The Chagos Archipelago is also home to several of the coconut crabs smaller, yet just as interesting, cousins. 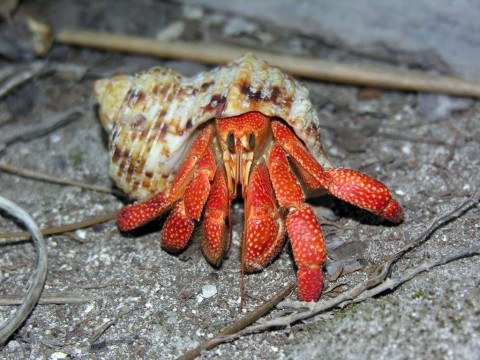 For instance, the aptly named chirping hermit crab, Coenobita rugosus, which uses its claw like a violin bow, rubbing it against the edge of its seashell home to make an audible ‘chirrup’. It is thought that this unexpected noise might be used to confuse predators.

Some of the land crabs, such as the strawberry hermit crab, C. perlatus, are even quite beautiful, with colours ranging from vibrant orange to deep red.

As part of CCT’s Darwin Plus funded “Creating a Terrestrial Action Plan for the Chagos Archipelago” project the Zoological Society of London’sinvertebrate team will be surveying invertebrates including crabs during the expedition in 2017.