CCT welcomes the appointment of an MBE in this year's Queen's Birthday Honours to Simon Hughes, secretary of the Chagos Conservation Trust, for services to environmental conservation.

Simon was one of the earliest members of CCT and has served as its secretary since its inception as the 'Friends of the Chagos' in 1993 when he was recruited by the founder, John Topp.

After serving 18 years in the Royal Navy as a Signal Officer, Simon became a Telecom Manager in BP for 10 years before fulfilling the same role at Schroders merchant bank in the City.  From 1991 he worked as a consultant with KPMG prior to striking out on his own for a  decade. His service to CCT since then has been of great value and deserving of this recognition. 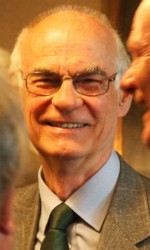