The President of Kiribati has expressed his fears about the need to evacuate the nation by 2050 due to rising sea levels.

Writing in a book about the Phoenix Islands Protected Area - a sister Big Ocean Network site - he discusses opposition to its creation, urges people to face the reality of the problems and calls for urgent progress in ocean conservation.

Kiribati is a collection of over 30 Islands lying across the Central Pacific Ocean.

We could almost write ‘Chagos’ in place of Phoenix Islands throughout!  Find the full text of his foreword below.

The following foreword is reprinted with permission from: Underwater Eden: Saving the Last Coral Wilderness on Earth. 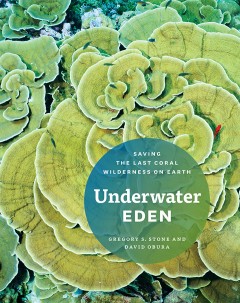 Kiribati is a republic of water, and nowhere in our thirty-three islands and atolls are you ever more than a few meters from the sea.  We are not a wealthy nation in financial terms, but the riches we do have – material, cultural, and spiritual – come from the Pacific Ocean. The waters around us are some of the most productive fishing grounds for tuna and reef fish in the world. Kiribati has its own small-scale tuna fishery, but over the decades, with the rise of multinational fishing fleets, we came to rely on the sale of lucrative fishing rights to provide the most basic services to our people.
In 2000 Kiribati made news around the world by announcing that we were closing off some of our best coral reefs and tuna fishing grounds to create a marine protected area (MPA), the ocean equivalent of a Yellowstone National Park.  Once the MPA was established we began to phase out commercial fishing from 11% of our exclusive economic zone, or EEZ – some 400,000 square kilometres.
At the centre of the MPA where the eight islands of the Phoenix group, home to a few dozen people and millions of nesting seabirds.  Offshore, the unspoiled reefs teemed with fish and other sea life at a level of abundance known nowhere else in the world.  Kiribati proposed to create a trust to offset the loss of fishing income and to permanently preserve the Phoenix islands, with their birds and corals and fishes.
We took this extraordinary step based on the word of a handful of scientists who had come to us five years earlier with news of a discovery in our waters – the unspoiled reefs of the Phoenix islands. “You have an extraordinary treasure,” they told us, “and an extraordinary opportunity to preserve it.”  Gregory Stone, David Obura, and their colleagues came to the government of Kiribati to show us what no previous scientists ever had: a wonderful, vibrant biodiversity unique to our waters, and the urgent need to save it.
The opportunity to save the Phoenix Islands became a firm commitment and shared cause, one championed from modest offices in Tarawa to legal boardrooms in Boston, Massachusetts, and Washington, DC, from government offices in Australia and New Zealand to international conferences in Brazil.
The establishment of the Phoenix islands protected area was by no means straightforward. There were deep reservations within Kiribati and in the wider financial and conservation communities.  Our fisheries partners vigorously contested the loss of some of their most fertile fishing grounds.  Our own citizens protested over the potential loss of much-needed revenue.  Naysayers maintained that the plan simply couldn’t succeed, that such a tiny nation with so few resources couldn’t police and enforce a huge marine protected area.  But the Phoenix Islands Protected Area was established, then enlarged.  In 2010 the Phoenix Islands were inscribed on the World Heritage list by the United Nations Environmental and Scientific committee (UNESCO), becoming Earth’s largest and deepest World Heritage site.
The Phoenix Islands teach us that much can be accomplished with sufficient political will and commitment.  The people of Kiribati face the real possibility of being displaced by climate change as our planet warms, sea levels rise, and our low-lying atolls leave us nowhere to go.  Beginning in 2003 the government launched the Kiribati Adaptation Program to respond to climate change by capturing rainwater, planting mangroves, and taking other steps to reduce Kiribati’s vulnerability to rising sea levels and other effects of climate change.  Since 2007, in partnership with AusAID, the Kiribati Ministry of Education has funded the training of I-Kiribati nurses at Griffith University in Australia.  By providing economic incentives for emigration and allowing young people time to establish I-Kiribati communities in other countries, the  Kiribati Australia Nursing Initiative and programs like it seek to facilitate the eventual migration of the people of Kiribati by 2050 with dignity and hope.
Yet the people of Kiribati recognize that they are still stewards of the ocean that now threatens their way of life.  They see the value of saving the Phoenix Islands, a national treasure that belongs not just to Kiribati, but to the world.
This book tells the story of the underwater Eden that is the Phoenix Islands and of the race to save this wilderness against great odds.  It tells of the islands’ past and present, but their future is yet to be written.  We all write that future every day, as stewards of our shared ocean.  It has been observed is that human blood has the same salinity as the ancient seas from which life on land first emerged millions of years ago. The Phoenix Islands awaken us to the ancient truth that the ocean is within every one of us, and we must manage it as one people.
Underwater Eden: Saving the Last Coral Wilderness on Earth. G.S. Stone and D.O. Obura, eds. The University of Chicago Press, Chicago. 170 pp. © 2012 by The New England Aquarium.