An exciting discovery could see the naming of new corals from the Chagos Archipelago.

As part of the John Ellerman Foundation funded Corals of Chagos project the team, made up of Chagos coral experts Professor Charles Sheppard, Dr Doug Fenner and Anne Sheppard, have spent a couple of years producing a consolidated list of all coral species that have been found in the Chagos Archipelago.

They have been meticulously cataloguing coral collections from earlier expeditions donated to the Natural History Museum and combining them with earlier lists, knowledge of synonyms, and the extensive photo-documentation of corals over the last 10 years.

The Chagos Archipelago is a major stepping stone in the Indian Ocean’s movement of coral reef species, and its importance is all the greater for that.

One well known coral taxonomist once said that any species name, especially perhaps for very difficult groups such as corals, should be viewed as a hypothesis. Here too, we expect to modify the Corals of Chagos lists as time passes and as we receive feedback.

Some species have not been seen since the 1998 warming killed most shallow corals, and 2016 likewise appears to have wreaked great mortality on these reefs. So this is a list of what has been seen there over time, not necessarily what is there now, but it is nonetheless important to document the changes over time.

Among the many photographs that we took, there were some that couldn't be identified. Some of them stood out as rather distinctive yet didn't match coral species we know.

It is easy to find corals you can't identify, but difficult to find out whether they have ever been named before, perhaps found and described more than 100 years ago from another place. That work can take years. 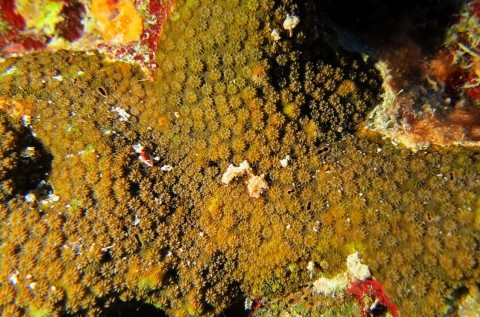 The eventual prize from that work may be new species, or simply the re-discovery of species that have not been recognized for a long time.

In either case, it adds to what we know about corals and reefs. We found perhaps four such species. One is a glorious and large branching Acropora, one of the large, loosely branching species, whose skeletal structures seem different to those we know. The other is a relatively inconspicuous Cyphastrea, distinctive because of its
unusual numbers of septa, something already known in this genus though not in the way seen here.

In due course, these will undergo the formal process of naming along with a couple more found amongst the unnamed specimens in the Natural History Museum.

We deposited hundreds of specimens there from surveys done in the 1970s, some of which we likewise think are new, needing formal naming.  The Corals of Chagos will also contain a couple more which we have not, and so far cannot, put names to, which might be new but that need more detective work before we can be sure.