For several years past, we have mapped the recovery of corals on reefs of the Chagos following the warm water event of 1998 that killed most of them.  For simplicity in presentations I have generally shown the recovery in terms of average coral cover, with data from all sites pooled.  Although we keep much data for sites separately and use that in scientific articles, overall the picture of recovery has been similar enough all over the Chagos Archipelago to permit this averaging.  We have presented graphs showing this almost annually for several years now, with updates published in Chagos News, at the Chagos day conferences, and other places.

At the same time we have been recording water temperature in several places and depths too, which has shown interesting patterns of rising and falling thermoclines (bands of different temperature water), and we continue to measure these details too.

Until recently the trends have shown a fairly straightforward recovery from the early 2000s, but I don’t think this uniformity is the case any longer – not for this year anyway.  In some areas we see the continued recovery, not so much in terms of coral cover now because this is around the maximum that such reefs generally have, but in terms of diversity of the corals growing on the reefs.  The initial flush of fast growing table corals is diminishing (with masses of dead tables clearly visible) and these are being replaced by a much greater variety of smaller, boulder shaped corals that are taking their place.  This is a process called succession. 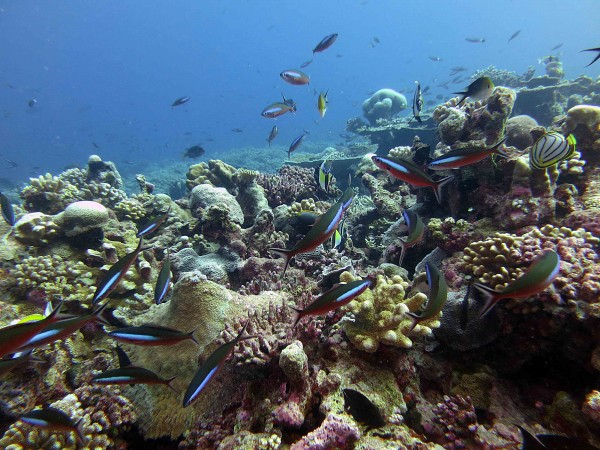 Blenheim Reef is an atoll which continues to show thriving and healthy corals in most places.  The initial ‘flush’ of fast growing table corals is being replaced by a higher diversity of corals.

In many areas continued recovery is still the case in 2015, but in others, there is a clear and marked deterioration.  On Nelsons Island, and parts of Eagle Island, for example, the reefs look devastated, gloomy, with silty water, and the very few live corals cover no more than 5% of the substrate. 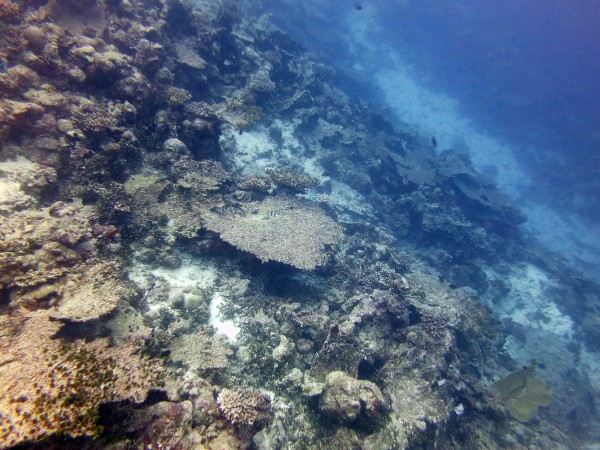 North slope of Nelsons Island on the Great Chagos Bank.  Almost all the corals here are dead and starting to crumble, with only a very few survivors from whatever killed them over the last year or two.

Clearly such areas can no longer be pooled with the healthy reefs to show any sort of general or averaged pattern.  Instead, reefs seem to be going in two different directions: on one hand continuing to look good, with increasing coral diversity, but on the other hand, reverting to a state not seen since the immediate aftermath of the very damaging1998 warming event. Why?

Temperatures may give an answer.  This year they are high.  This has been predicted since the summer of 2014 in fact, when warnings were issued that ocean temperatures would be higher than ever before.  It has not been quite that warm, perhaps, but water is certainly warm in Chagos this year.  Using loggers recording at 1 minute intervals that record to two decimal places of a degree, as well as the temperatures that we can read from our dive computers, water temperatures have generally been from 29 to 30.5 degrees, to depths of 20 metres deep and more.  These are extraordinary values.

Consequences we can see include some coral bleaching, but really only a little by March 2015.  There is a lot of paling of colour in shallow waters.  It is not only temperature but the time spent at that temperature that is important, and we don’t yet know how long this warm episode will last.  There is also a clearly visible increase in coral disease prevalence, though this is the topic of another blog.

It might therefore be that some areas are experiencing warmer conditions than others are, or have warm conditions for a longer time than others, in which case this might be the cause of the two different trajectories seen on these reefs in April 2015.  The fact remains that temperatures of around 30 degrees and greater on ocean facing reefs, to over 20 metres depth, are alarming.  To see the consequences of this (if any) we will have to wait several months before we can tell.

One thing that is clear though is that, during the time of our visit at least, reefs are travelling in two different direction in ecological terms: one continuing their high cover and with noticeably increasing diversity, and one group showing rapid deterioration, showing little more than dead corals and rubble.  We hope that ocean temperature now will cool (we need wind and heavy cloud now!) in time to prevent the healthy reefs going the way of the newly killed reefs.

[PS in late April.  The Living Ocean Foundation participant Professor Sam Purkis, who is currently in the archipelago,  has reported that bleaching is in full swing.  In a month's time we should know whether this will lead to mortality... or to recovery of the corals affected.  It will likely be many months before measurements of live coral cover will be repeated in a manner similar to that described above.]