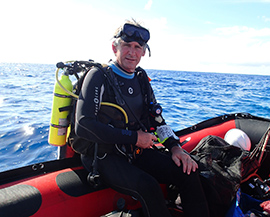 By Professor John Turner, CCT trustee and leader of the Chagos 2017 expedition

We are here in the Chagos Archipelago amongst some of the most remote reefs in the world to investigate the effects of two major warming events over the last two years that have caused the coral reefs to bleach. We want to know whether the reefs are showing extensive mortality or signs of recovery, as they have previously.

Having completed our coral reef assessments at Peros Banhos atoll a clear pattern has begun to emerge.

We have dived 10 sites, including a mixture of exposed and more protected reefs seaward reefs, lagoon reefs and lagoon patch reefs to a depth of 25 m. Unfortunately branching and tabular corals, such as Pocillopora and Acropora, are dead in shallower water above about 15 m.

Some of the smaller branching colonies are while dead are still standing, but many of the table corals have collapsed, potentially forming new calcareous substrate that will eventually become cemented together, and form a suitable surface for new coral recruits. 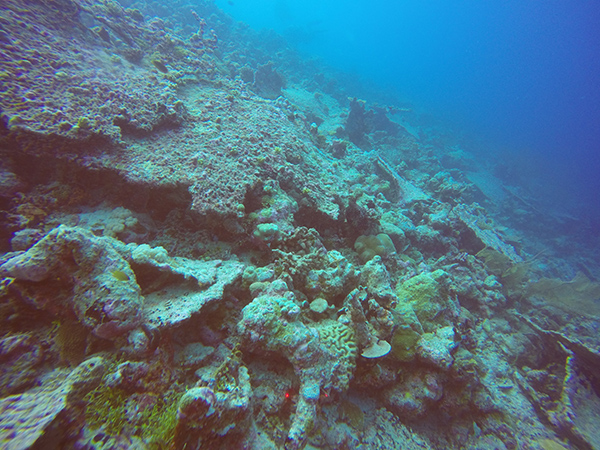 However, in more exposed locations, it is evident that table corals have fallen down the reef slope, often being overturned and left on the reef, while in very exposed sites they have been swept off the reef entirely into deeper water, taking the newly settled recruits with them.

Corals surviving in the shallows are the large rounded colonies of Porites, including the extremely large (>5m diameter) colonies that could be many hundreds of years old.

A different picture emerges at deeper depths, where we see coral communities in generally good health. 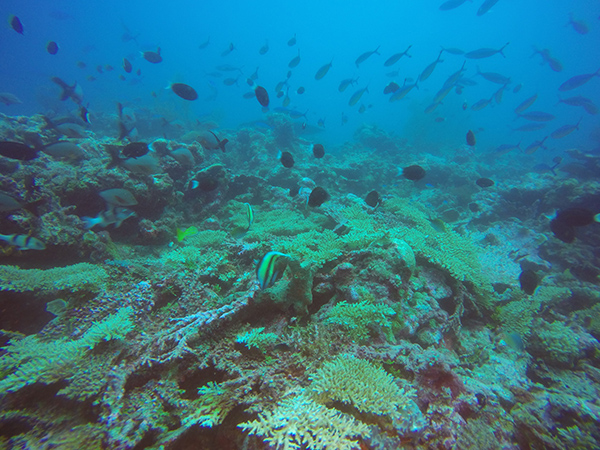 Deeper on seaward reef slopes and lagoon reefs, most corals are surviving, although some have suffered partial bleaching and dead corals are evident. We have noticed that on these exposed seaward reefs there are cold water upsurges that may be helping to cool these corals, which is why we’re seeing less affected by bleaching.

Along with my colleague, Ronan Roche from Bangor University, we are repeating video transects at 5 m depth intervals to 25 m to compare with records in the previous four years and from 2006. 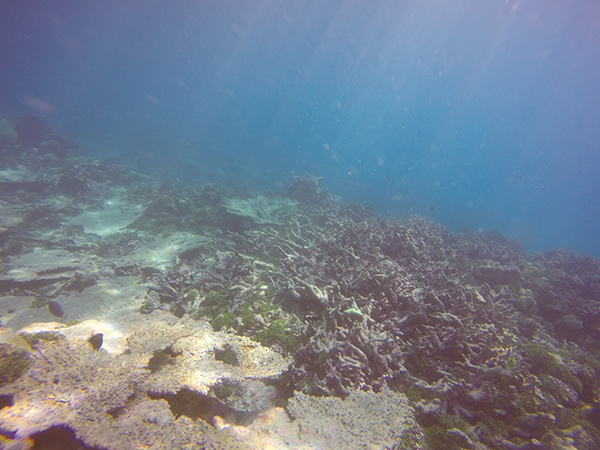 the same depth bands with a specific focus on recording the density of coral recruits. Coral recruit density shows considerable variability, perhaps because we are seeing well established recruits from last year on stable substrates, and new recruits from this year on less stable reef surfaces.

So, the bad news so far is that there has been substantial mortality of corals in shallow water.  The good news is that corals at deeper depths appear to be surviving and may be a refuge, potentially providing new generations of coral recruits.

At present, there is still structure provided by dead standing corals in shallow water, which provides habitat for some fish but the longer term impact on fish communities is unknown.

We are obviously saddened to see the coral reefs of the Chagos Archipelago in this state, which is no different to that of other climate affected locations such as the Great Barrier Reef, but remain optimistic that these reefs, protected and remote from human impacts, can still bounce back as they did after the 1997/98 warming event.

The BIOTExp17 is funded by the Bertarelli Foundation.