We awoke around 4:30 this morning with the clanking of the anchor being raised. Those of us who were lucky were able to get back to sleep for another couple of hours.  After breakfast we arrived at Nelsons Island, the most isolated island, perched on the northern rim of the Great Chagos Bank.

Nelsons Island was never inhabited.  People came from the other atolls only to collect birds, turtles and the eggs of both groups, and so for that reason there are no rats. Instead there are thousands of birds.

Pete Carr, the expedition ornithologist was very enthusiastic about getting onto the island to continue his ongoing monitoring of the spectacular bird populations.  He was first in line waiting for the RIB to take us ashore.  Well not quite ashore, it was low tide, with fairly rough sea conditions,  and the island is surrounded by reef.  We had to jump into the water and swim 20 metres or so onto the reef and fight our way through the surf into shallow water.

But it was worth it, Pete Carr takes on the story from here:

Tuesday was a non-diving day for the divers and the first visit to an island that was known to be rat free and categorised as an IUCN Important Bird Area – Nelsons Island.  After a challenging swim ashore that involved navigating over the island’s reef fringe, research and monitoring was undertaken of the birds.

Nelsons is a unique island in the Chagos.  Only two species of tree have colonised the island, Pisonia and Coconut and both appear to have arrived naturally, the vast remainder of the island is covered by the shrubs Scaveola and Argusia.  This has brought about the unusual circumstances of Red-footed Booby breeding in coconut trees in some numbers - this is the only island in the Chagos where this occurs.  (Possibly Nelsons is younger than other islands and other tree species have not yet arrived, boobies breed on what is available and this is a view of a Chagos island 10,000 years ago?). 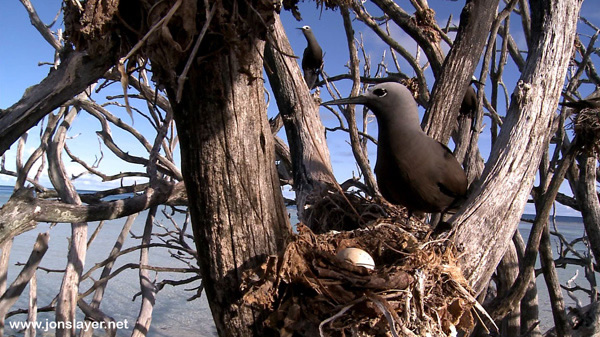 The island remains in excellent health.  Lesser Noddy breeding numbers are equivalent to what they were in 1996 and both Red-footed and Brown Booby breeding populations are at a record high.This is of particular importance because in the Indian Ocean as a whole, the populations of boobies are crashing. Of concern is the fact that Brown Noddy has still not been found to be breeding in numbers anywhere near their high of 1996.Even though the sky was overcast and some precipitation fell, the beautiful endemic subspecies of Meadow Argus butterfly managed to put in a few brief appearances.

After returning to the Pacific Marlin, we sailed to the submerged atoll of Victory Bank, where Tom and Jessica deployed several of the BRUV units.  A description of that will be in tomorrow’s blog, when they have had time to download the footage

In the evening we continued on to Peros Banhos atoll, where we will be diving for the next three days.