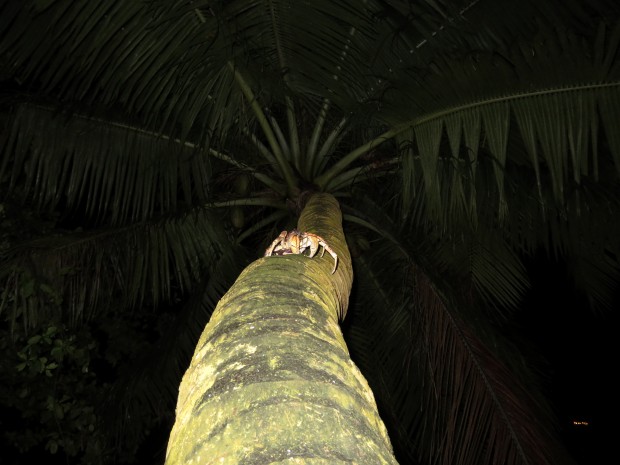 During the Voyage of the Beagle, Charles Darwin passed through the Indian Ocean. Not far from the Chagos Archipelago Darwin made his first encounter with the coconut crab (Birgus latro) and he noted in astonishment how this species “grows to a monstrous size” (Darwin, 1845).

Indeed, the coconut crab is the world’s largest terrestrial invertebrate, reaching over 1 metre in leg span and weighing up to 4 kilograms. Perhaps due to the remote locations that coconut crabs inhabit, on isolated coral atolls and tropical islands throughout the Indo-Pacific, this species has received scant scientific study since Darwin’s pioneering observations. From January to March 2016 I undertook an expedition to study coconut crabs on the archipelago.

This species thus spans the marine and terrestrial environment, sometimes even climbing high into the trees. As larvae, coconut crabs disperse through the ocean planktonically. After approximately a month at sea, they then transition to a fully terrestrial existence and thereafter are unable to breathe underwater. On land, their juvenile stage is spent occupying empty snail shells for protection, like the terrestrial hermit crabs from which they evolved. Yet unlike terrestrial hermit crabs, coconut crabs re-calcify their otherwise soft abdomens as they grow and eventually cease using externally-derived shells—for none would be large enough to accommodate the extreme size which they ultimately reach in adulthood. Interestingly, measurements of molting and growth across coconut crabs’ lives have led to conservative estimates of their longevity, which indicate that individuals do not reach full adult size for at least several decades, and that especially large individuals may be well over 100 years old. 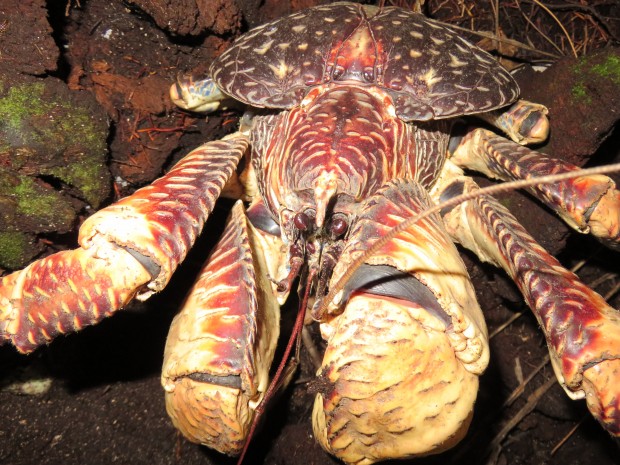 For the better part of a decade I had been completely engrossed intellectually with studying terrestrial hermit crabs (e.g., Laidre 2010, 2014). It is no exaggeration to say though that during this time I had always dreamed of extending my studies to include coconut crabs. I was, however, quite picky about where to initiate a study of coconut crabs, for one of my central interests in wishing to study coconut crabs was to understand their natural behavior. And sadly, coconut crabs have been negatively impacted by humans in many locations throughout their once vast range within the Indo-Pacific.

Indeed, hunting and habitat destruction by humans have dramatically reduced their numbers in places where they were formerly abundant; and even in locations where coconut crabs persist to the present, their natural behaviour has often been severely altered by humans. Where then to launch a study of coconut crabs?

The answer to this question came when I was contacted by the BBC Natural History Unit in January 2015. They asked me to be their scientific consultant and help them acquire video footage of the natural behavior of coconut crabs. Their proposed location: the Chagos Archipelago. This opportunity had me leaping out of my proverbial shell, since it is arguably one of the most pristine locations on the planet to study coconut crabs.

I therefore immediately said yes to the BBC, our agreement being that I would help them get their footage for a couple of weeks and thereafter spend a much longer period collecting systematic scientific data for my own project on coconut crab behavior.

Alas, after submitting our permits both to video and study on the archipelago, and after waiting over a year since the BBC had initially contacted me, a BBC producer casually phoned me to say they were dropping out: the wait for permit approval was proving to be too long for them. I remained patient though, given my interest in studying in this unique environment. And as luck would have it, just a month after the BBC dropped out, my own scientific permits were approved! Thankfully, National Geographic also offered me a scientific grant to fund my expedition. So with both approval and funding in hand, nothing but scientific fieldwork lay ahead, which I eagerly dove into for two wonderful months of near non-stop data collection, natural history observations and experiments. 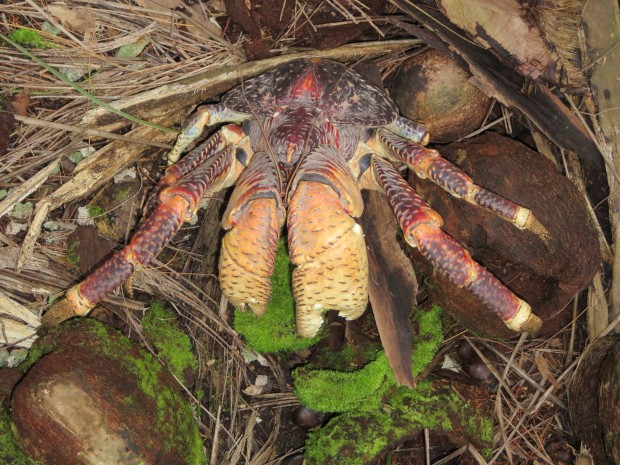 Now, nearly two years after this successful scientific expedition, I am still writing up the many results of these sundry studies of coconut crabs. Remarkably, at the time of my expedition, no published scientific paper even existed on how coconut crabs open coconuts, despite this being the very origin of their name (clearly there were many low-hanging scientific fruits!).

My multi-faceted investigation of coconut crabs thus included detailed studies of everything ranging from coconut opening to: population abundance and genetic diversity; measurements of underground lairs and burrow architecture; transects of activity levels during day and night; experimental tests of social behavior; fine-grained quantification of biomechanical claw strength; analyses of fighting behavior and competitive interactions between invasive rats and coconut crabs; and systematic observations of foraging ecology and predatory behavior (for published studies, see: Laidre 2017, 2018a, b).

Of course, much still remains to be learned about these fascinating animals, including the vital role that coconut crabs may play in shaping communities of surrounding species and maybe even whole island ecosystems. Also, while coconut crabs were once classified as ‘vulnerable’ on the IUCN red list in 1981, no systematic surveys have since been undertaken, so presently the species is classified as ‘data deficient’—a situation that needs remedying.

The data analysis and reports from my first expedition have kept me busy (as Darwin’s Beagle Voyage did for him); but I am now planning future expeditions to the Archipelago, as well as to other sites. Only through careful continued research on coconut crabs, from larval through adult life stages, and only with much deeper knowledge of coconut crabs’ fundamental behavior, ecology, and evolution, will humanity ever have the necessary knowledge to conserve this unique species.

As a Dartmouth professor in the early stages of building a lab full of eager and curious postdocs and PhD students, one of my chief objectives is to continue a long-term field research program on coconut crabs. My goal is to foster further scientific discoveries, which can help inform coconut crab conservation efforts, both in the Chagos Archipelago and throughout the Indo-Pacific.

Critically, a solid funding base over the next decade will be essential to this enterprise. Thus, while I hope the BBC may consider joining my team on future scientific expeditions to the archipelago, I am now most eager to intersect with organizations such as CCT and the Bertarelli Foundation, since these have the alluring potential to fund our future long-term research on coconut crabs.

Darwin, I suspect, would smile upon these aspirations. For as we build on his pioneering observations and continue to learn more about coconut crabs, we can ultimately provide a foundation for conserving this unique species, thereby ensuring it exists for many future generations to appreciate and learn from.

Acknowledgements: My study was facilitated by many kind and helpful people, whom I thank and remain deeply grateful to. I am grateful to the BBC Natural History Unit for tipping me off about the Chagos Archipelago as a study site. I thank Jon Slayer for facilitating many logistics and also for providing helpful field assistance during the beginning phase of my expedition. I am especially grateful to Edward Lees (the British Representative and Commander of the Royal Navy) for approving all my observations and experiments and for allowing a longer-than-usual study period, which enabled me to collect detailed behavioural data. I also am grateful to Helen Stevens (the Environment Officer), Nestor Guzman, and Mahan Luchmun, all of whom provided helpful information and even occasionally lent a hand during my fieldwork. Pete Carr, who I fortuitously overlapped with during the initial portion of my expedition, passed on much useful information and he has been a valuable colleague ever since. Finally, I thank the Committee for Research and Exploration of the National Geographic Society for funding my expedition.

Laidre, M.E. 2010. How rugged individualists enable one another to find food and shelter: field experiments with tropical hermit crabs. Proceedings of the Royal Society of London, Biological Sciences 277: 1361-1369. http://rspb.royalsocietypublishing.org/content/277/1686/1361