After transiting through Diego Garcia and boarding our research vessel we found the sun rising over Danger Island on this morning in February 2015. The voyage overnight had been a little bumpy and the sea was a little unsettled with weather coming from the North West. Fortunately for us anchored in the lee of the island on the southeast there was a little respite from the advancing swell. After the immense administrative task of getting all of our gear out to this remote part of the world over the preceding months and weeks and the laboured task of unpacking it all the day before we now had to get it all working and into the environment. This wasn’t without its teething problems.

Cameras and electronics needed setting up and testing, underwater gear needed assembling and boats needed to be serviced and put in the water. A wee bit of a circus that finally got its act into play around mid-morning. The Catlin team headed off to do their seaview surveys and Elizabeth and I headed ashore to Danger Island to do the first of our Trekker Street View surveys.

After a boat launch that resembled a swift battering in a wrestling ring with us bouncing around next to the larger patrol boat while trying to load the bulky trekker boxes we motored smoothly towards the east side of Danger. There we anchored about two thirds of the way up the island in a convenient sandy circular break in the reef which could be seen from the turquoise colour of the water contrasting with the surrounding darker colour of the water over corals.

Dropping over the side we swam the boxes to shore and dragged them up the beach before assembling the trekker street view camera – a routine which I’m sure we’ll get used to in the coming couple of weeks. 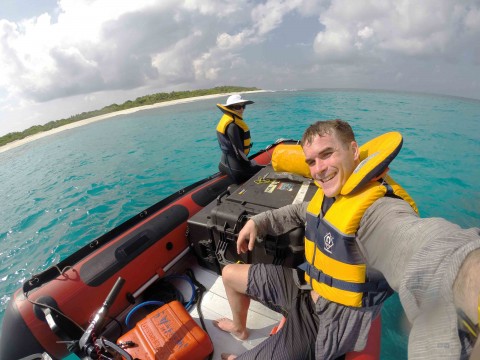 I then started my route around the shore of the island humping the camera on my back. This was a hot and sweaty job. Hard work in the soft sand under the baking tropical sun. It was however rewarded with beautiful views of this wild strip of land. Numerous red-footed booby roosting and nesting in the scaevola and heliotrope bushes whilst common noddy and fairy tern fluttered about. Brown booby occasionally agitated from the ground where they prefer to settle themselves provided they have a bit of a beach drop off and clear water to launch themselves back into flight. They are not very accomplished on the ground in stark contrast to their agility in the air. Several contemplated landing on top of my protruding camera at the start of the walk! 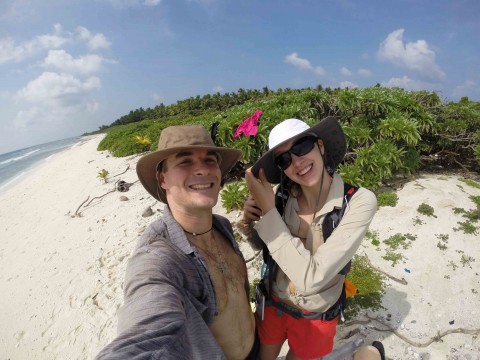 On the far side of the island there were numerous ghost crab mounds dug up in the steeply sloping beach. Whilst walking passed one of these I saw another species of crab – a sally lightfoot crab – scuttling awkwardly with a large load dragging between its legs and held in place by its claws. On closer inspection it could be seen that it was cannibalising another crab. Something I had not observed before. I passed several turtle tracks and nests before coming across another interesting sight. 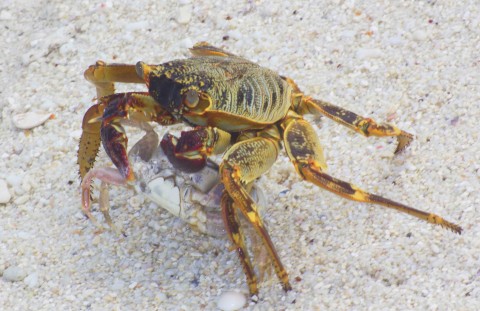 A stand of shrubs growing at the beach edge had almost completely been stripped of foliage by what was evidently the work of either an insect or caterpillar. I was at first intrigued by this because a closer inspection of the leaves revealed no culprit – although there were numerous small black droppings clouding the sand beneath the almost leafless trees. My closer inspection did reveal a small jumping spider though – with something between his jaws. This turned out to be a tiny caterpillar. Much to small a caterpillar to do this sort of damage though. But then beneath the leaf that the spider was on I saw the real culprit for the lack of greenery. 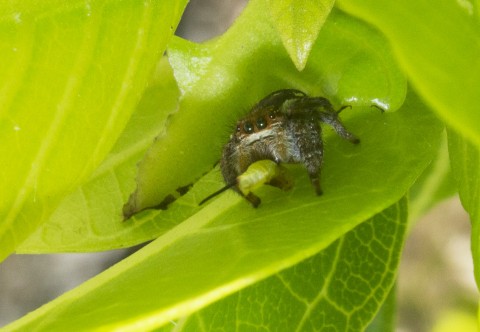 A large caterpillar stretched beneath one of the few complete leaves to shade itself from the hot midday sun. I wish I had such respite but had to instead continue. Trudging through the shore sand, breathing hard and sweating away. It took an hour and a half to circle the 5.7km circumference of the island.

We then took on a couple of transect across the island to capture the vegetation there and search for any invasive plant species. This was even hotter work as the plant growth in the interior is jungle like. Thick, lush and almost impenetrable in places. The first transect largely fit this profile and it took plenty of thrashing to make it through to the other side. We then walked north and this time around were more fortunate in selecting a route across the island that consisted mostly of large well established pisonia trees. These afford lofty habitat for seabirds to roost in the canopy but beneath this the forest floor is relatively clear and much easier to move through. Of course this only lasted until the thick scaevola which usually lines the beach on these islands. As usual this was a real challenge to push through. These are really wild, wild strips of land.

Back on the beach we repacked and took an exceptionally refreshing plunge into the ocean to swim our way back to our anchored dinghy. With a short while left before we needed to be back on board the boat we dropped back over the side with mask and fins for a hasty snorkel and were rewarded by the richness of marine life in this largest no-take marine reserve in the world. An eagle ray, huge shoals of humpback snapper, a shoal of large pencilled surgeonfish and a series of large individual snapper passing through. All in the space of 5 mins over mounds of coral around our sandy anchor patch.

A quick motor back to the waiting research vessel and an end to a very tiring but productive first day. Now for a much needed rest before doing more tomorrow!