The deep green islands and beaches of bright, pale yellow look as enchanting as ever.  But beneath the water we note some profound changes have taken place.

The first clue comes from the water, which is murkier than it was a couple of years ago, with a relatively large suspended sediment load. The reef condition reflects this. 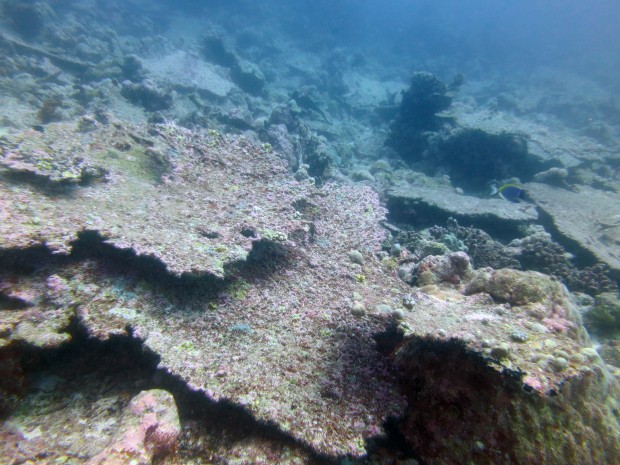 As we dive down to 15 metres depth we see the large majority of corals are dead with their soft limestone skeletons eroding. Skeletons of the once plentiful and diverse corals have a film of very fine filamentous algae over them and a covering of dusty sediment that comes partly from the eroding corals. It is not a pretty sight. 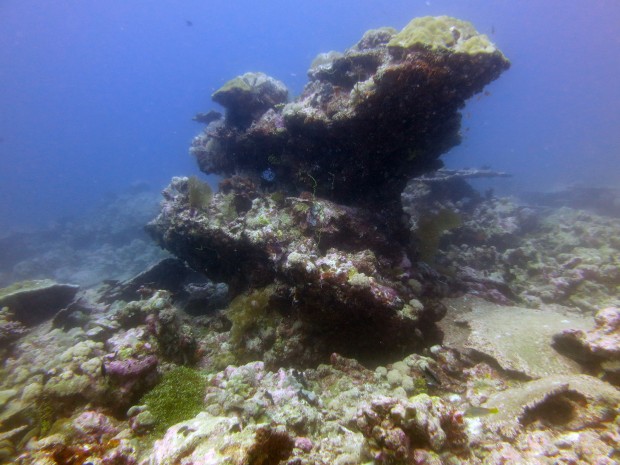 Thankfully a happier story develops as we venture below 15 or 20 metres deep. There the percentage of reef surface that is covered with live corals increases to more healthy levels. There is a selection of species occurring as some groups are more resilient or susceptible to sea temperature than others.

To date, after six dives by both of us, we have yet to see a single live example of the endemic brain coral Ctenella chagius. This unique brain coral used to be common here and is found nowhere else in the world

Other corals, whole groups of them, are either missing or very scarce. But a caveat is needed before we can make firm conclusions – we have dived only six times so far, but certainly the numbers of many are severely reduced.

This did happen before, in 1998, when the water warmed but recovery did take place. Although it was about a decade before the scene on the reefs returned to its normal vibrant state.

So, recovery could happen again. The reason for the mortality is extreme sea temperature in recent years. We have so far recovered three of the temperature recorders we placed a decade ago that have been recording temperatures at various depth intervals every two hours.

They show clearly the warming that occurred through to last year when, around October, the temperatures dropped again, bringing the corals some respite. But much damage was done, and shallow water, unsurprisingly, warmed the most which is why the shallow 15 metres of reefs are the worst affected.

We are continuing to recover the deployed recorders, and to measure coral cover, to help form more accurate conclusions. We are also counting juvenile corals, to obtain estimates of how quickly and how easily corals may recolonise.  More on that later…