We couldn’t have asked for better conditions to start the expedition – motoring out of the lagoon this morning the water was flat calm and mirror smooth. This makes for really easy whizzing around on the surface – what a pleasure the day has been!

First thing this morning we were into the water Oceanside of Diego Garcia to get more surveys done and retrieve some temperature loggers. There was a big smile on Anne’s face when she returned from the dive with both loggers from 15 and 25 meters. A smile that was echoed by Charles as he successfully downloaded all the data from the last year to add to his data set from the last 9 years at this site.

This dive off the NW coast of Diego Garcia was alive with larger fish. There was a strongish current so whilst swimming alongside the boat we had the opportunity to watch the marine life as it drifted by. Napoleon Wrasse (with a lone Jack escort), Eagle Ray and an aggregation of Snapper not to mention the odd shark or two…

The research vessel picked us up off the coast and we were soon under way round the north of Diego Garcia and on to Horsborough Bay. 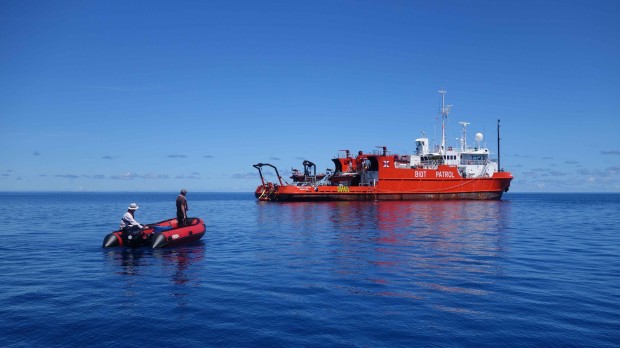 There we had quite a fascinating dive. I was shallow diving with Courtney and the coral heads on this reef were crawling with life. Small shrimps were the highlight for me. On one coral head a series of snails (Drupella) were predating the coral whilst the shrimp (Saron sp.) moved in to scavenge the leftovers after the snail had been through…the first time I have seen this very colourful species of shrimp in Chagos. 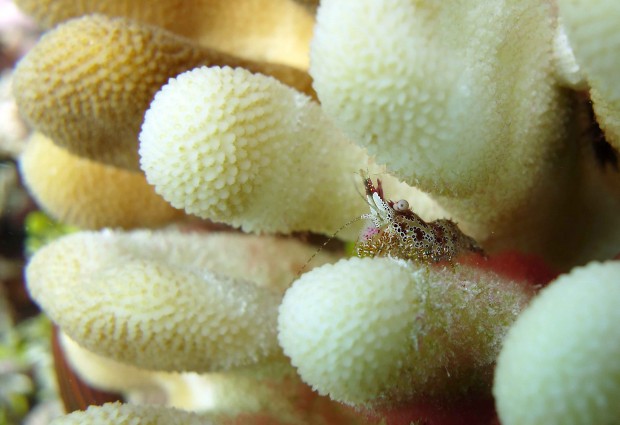 After a successful dive to round off the day we’re off to Peros Banhos atoll! Looking forward to getting ashore and underwater there. Whilst we have been busy diving Pete has been continuing his work on the islands. An update from him below on his day's activities... 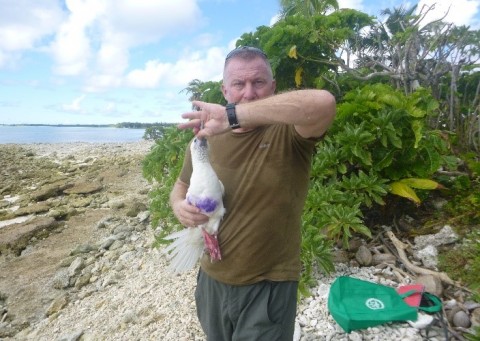 A small part of the research I am doing this year is looking at Red-footed Booby “parenting”. In particular, I am interested in how long the parents spend away from the nest and chick. This is a preliminary study looking at a bigger picture of where this species feeds and forages in and around the Chagos Archipelago and eventually, in to understanding what, if anything drives birds to feed in what areas and does this influence when they breed? Back to the basics though, my work over the last two days has been to capture, affix an individually inscribed metal ring and mark birds so as to be recognised again without being disturbed. The latter being achieved by applying a small amount of non-toxic coloured dye to the bird’s white plumage. This was achieved with the minimum amount of stress to the birds, though the same could not be said for those handling the birds, who came out with several scratches and bites! 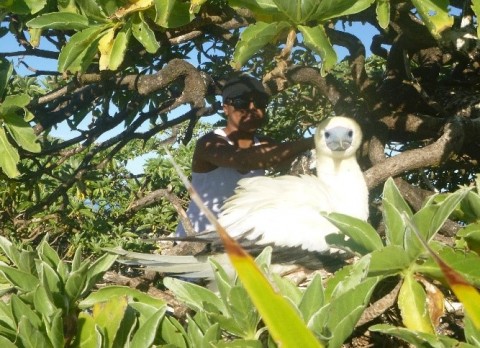 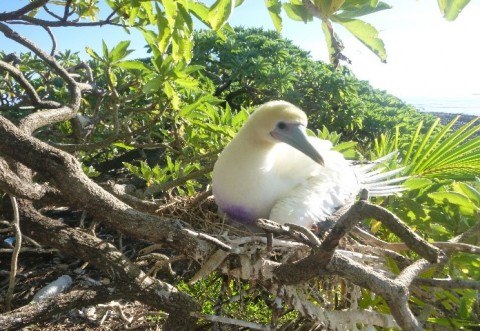 Marking the birds was the first and, what transpired to be the easiest part. The follow-on phase was to mount self-operating cameras besides the bird’s nests to monitor how often the parents returned to feed and tend their chick, something akin to CCTV on tropical islands. This proved to be far more challenging than I originally envisaged. I had not fully appreciated the full range of factors that need to be taken in to consideration when siting a remote-sensing camera on a tropical island and planning to leave it there working by itself for three weeks. First there is programming. Ideally, one should have thought through what type of data was required and how to capture this on film and then it is a simple matter of feeding that information in to the device. I had but, the camera did not want to comply with my orders! So, eventually realising I was fighting a losing battle with both time and technology, I sought assistance from my fellow expedition members. And none of them could enter the programme either. It took us sometime to realise the first camera was not functioning to specification!

So, two reserve cameras were brought out, our technical issues were solved and today these were deployed next to the nests. Deploying the cameras gave the first opportunity for Claudia Naraina, the Chagossian Environmental Student accompanying the expedition, to assist with the terrestrial field work and, she was a natural at being around breeding, aggressive seabirds as well as siting cameras to gain the best angles. As we start to gain information, questions arise. At nest one, the same originally marked bird has been present throughout the day for over 48 hours. At the second nest being monitored the parents have swapped over every 24 hours. As we are now underway for the northern atolls we will have to wait until we return to Diego Garcia in three weeks to see if there is any pattern to by who and how often these exceedingly resilient chicks are fed by.